I've been unable to give this site the attention it deservces, and I feel this flirtation is just that - not a basis for a serious relationship. So I've returned to an old flame.


Thanks for reading. If you still have the appetite for more. I'm at  http://dorsetdipper.blogspot.co.uk/

Nottingham in the fog

How to spend 6 hours in Nottingham? D#2 was at the University open day, so a click on birdguides and Attenborough Nature Reserve it was. A network of gravel pits, some with some hides and conservation effort, and a cracking centre with cakes, coffee, books etc.

My Kowa 883 needs some small repairs, soI took my reserve scope, my trusty Kowa TS-2 (un-coated) with the 32x wide angle lens that served me well for years. I pitched up at the first likely looking site, quick scan with the bins, popped up the scope, and Jesus where has l that fog come from? And why do my eyes hurt so much? And how on earth did I seen anything at all through this?

Some excellent conversation with locals, and a star bird too! Not the kingfisher or Sparrowhawk that sat out in the open, or the Garganey close in, or the Hobby way up high, or even the Snow Geese that cruised around with the local tame Geese, or the Wigeon just turning up for the winter. No the clear stand out star-bird was not even mentioned by anyone anywhere, it was the flock of Tree Sparrows on the reserve centre feeders. Some people don't know how lucky they are.

... so when I finally do this big year ... I'll need some technology if I'm going to do the full wildlife thing. Here's a set of kit.
I think that's it. do I need to collect stuff? owl pellets?some small sample bags?


So should anyone stumble across this, please leave suggestions or fill in any gaps.
No comments:


A few short local walks provided the entertainment this weekend. As we entered  Pishiobury Park with the dogs we were advised to avoid the “Swarm of Hornets” that were loudly buzzing nearby. From a safe distance I observed about a 100 or so insects buzzing in a furious swarm. Now in my recent walks the only insect I’ve seen that could be doing this in this number is bumble bees, but do they swarm like this? The best I can do is this


Bumblebees don't form swarms like honeybees do. But you might see a few bees flying outside a nest, especially if it's in a bird box or somewhere else above ground. These are male bees hovering outside the nest, waiting for queens to emerge so that they can mate. Male bumblebees cannot sting, and they pose no risk to you at all. Therefore, no action is needed to be taken for them.

On the return leg a stop to scan the skies. Common Buzzard, Kestrel, a few Common Swifts high up, and then what’s this? Something swift-like but not a swift. Larger, fluid deep wing beets, rather falcon like, or possible tern like, or wader like. When it turns I should get a better idea, but it doesn’t turn instead keeps on going where it is joined by two more, similar, possibly the same species. And high and distant these falcony/terny/wadery things keep going leaving me in a complete quandry, and quite exhilarated with the thought of what they could be.

Later on another walk a cuckoo silently jumped up from some long grass with an irate Whitethroat in attendance, and then flew off. Shortly afterwards cuckooing started from the top of an adjacent tree. Presumably this is a pair –I'm assuming the male calling from the tree top is not the bird rooting around in the grass, as this would be the female?

The bumble bees were still there, now identified as Common Carder Bee and on a large patch of Comfrey (thanks to Andy Sapsford). There were also buff-tailed bumble bee workers – like the queen but half the size. I reckoned about 7-10 per square metre, with about 30 sq m of Comfrey gives around 200-300 bees in this area for two species, so about two nests – one per species.

Then this morning a trip with camera to snap Sedge Warbler and Reed Warbler. They both performed as well as these species can. Unfortunately I didn’t. Here’s some shots that demonstrate that despite technology advances, some skill is required to get decent shots, and I don’t have that yet. 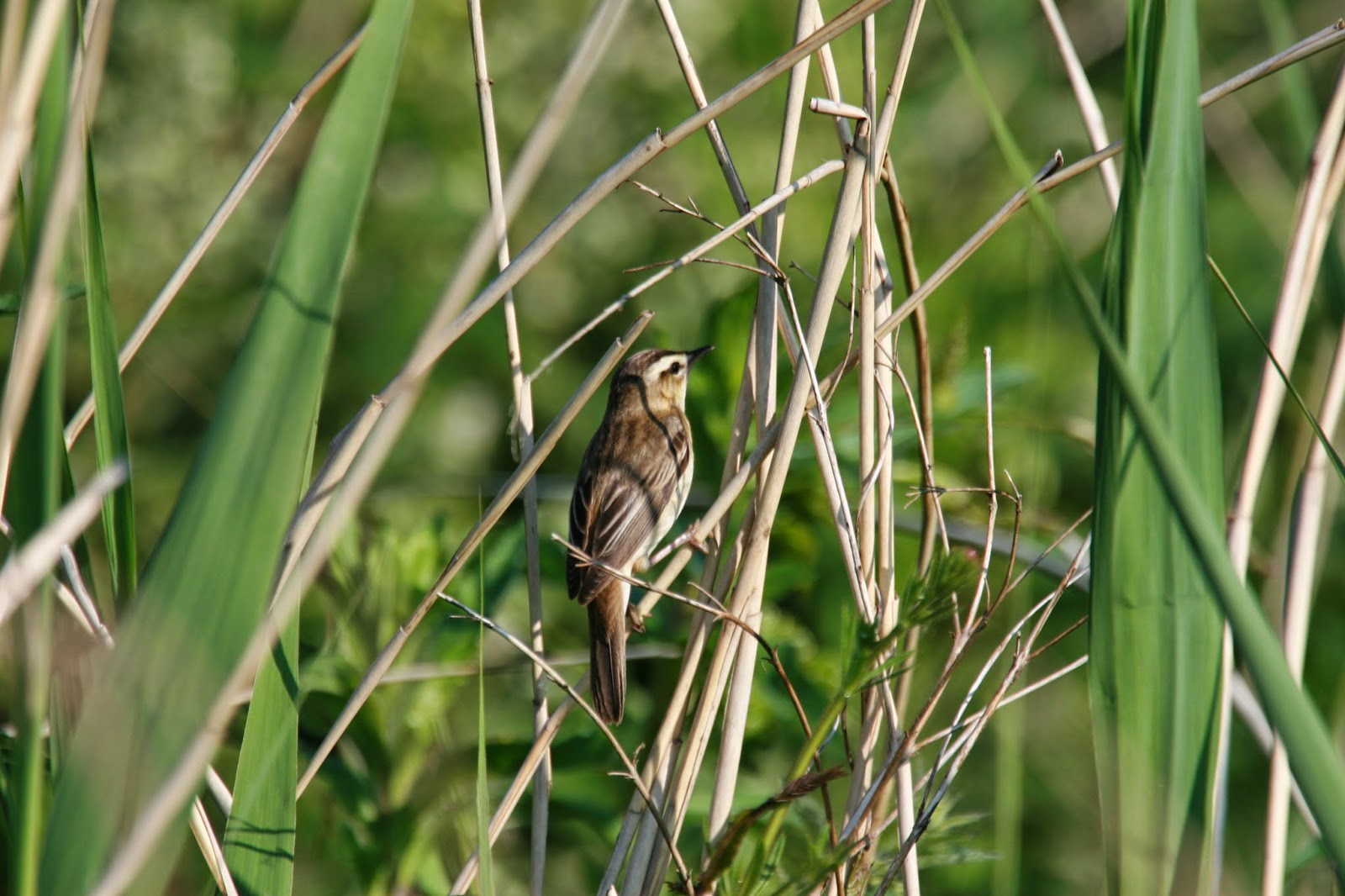 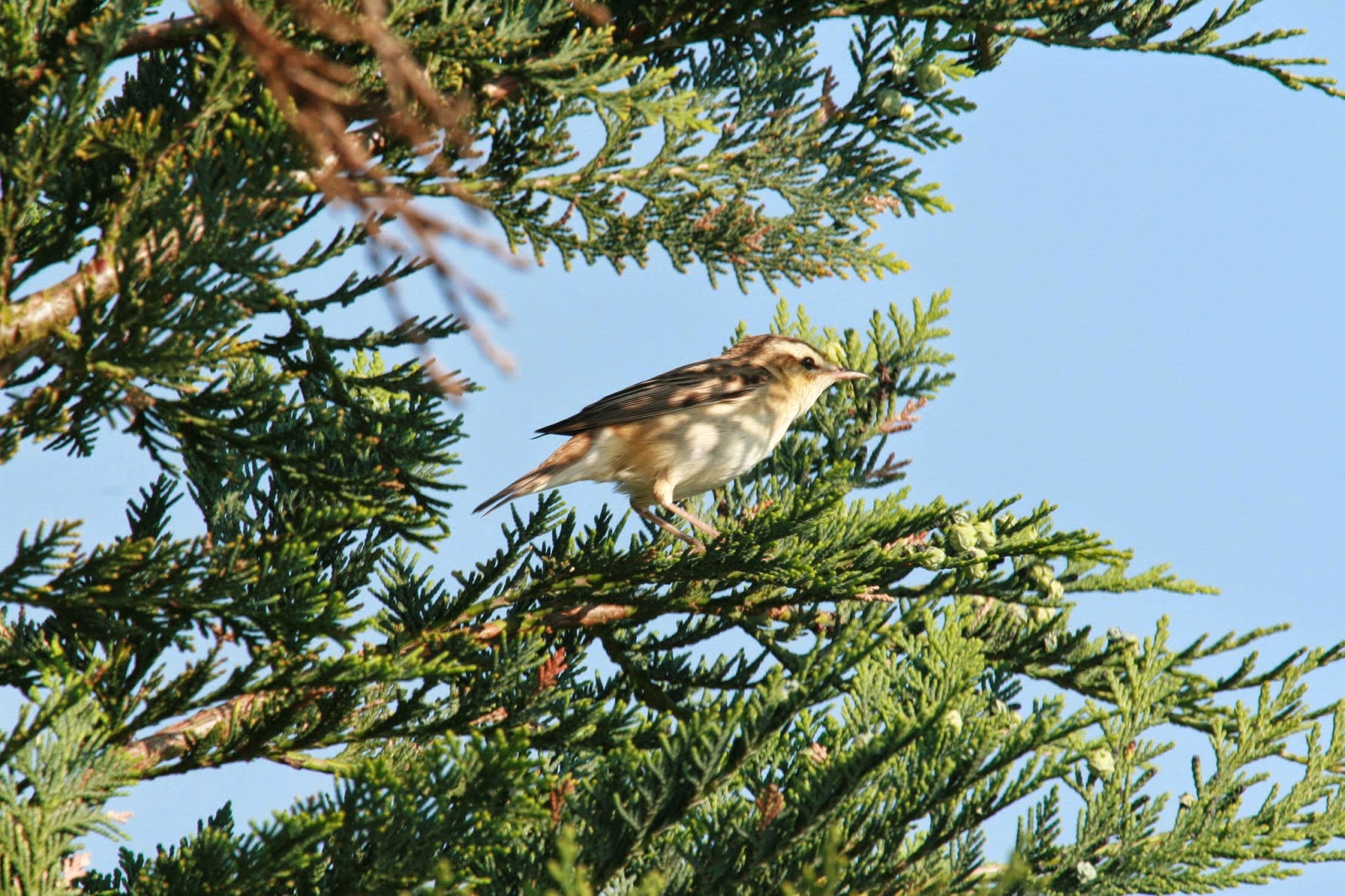 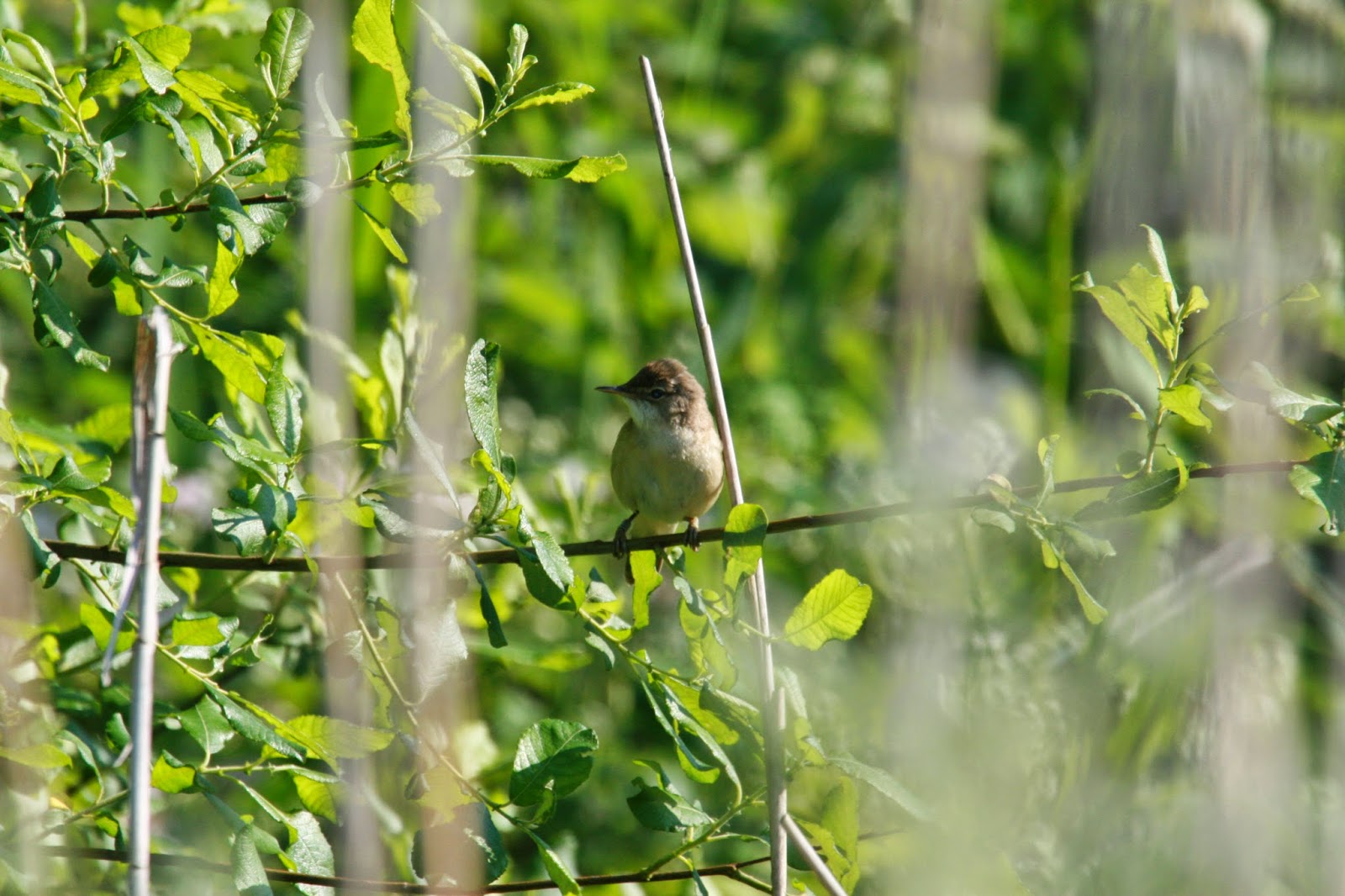 A few trips round the park and down by the river has produced the following list:

Gadwall – resident on SLRS
Teal – 2 on 3rd May on SLRS
Cuckoo – one calling incessantly, seen occasionally in the top of tall trees.
Hobby – 1 over the W edge of the park on 3rd
Yellow Wagtail – 1 in the usual field by the train track
Common Tern – 1 through up river.
Reed Bunting 1m
Linnet a few
Willow Warbler,
Lesser Whitethroat,
Whitethroat – plentiful.

Yesterday the insect army was out in force. Lots of bumble bees in one area, al round the same species of plant. You would have thought that with photos and guide books I would be able to identify the bee, but no. I think its the Common Carder Bee (Bombus Pascuorum), but it looks too dark and smooth compared to photos on the web. Apologies for the shots but the bees were either in flight or head first up a flower. These are the best ones for ID.Also, I have no idea about the plant (comments welcome!) 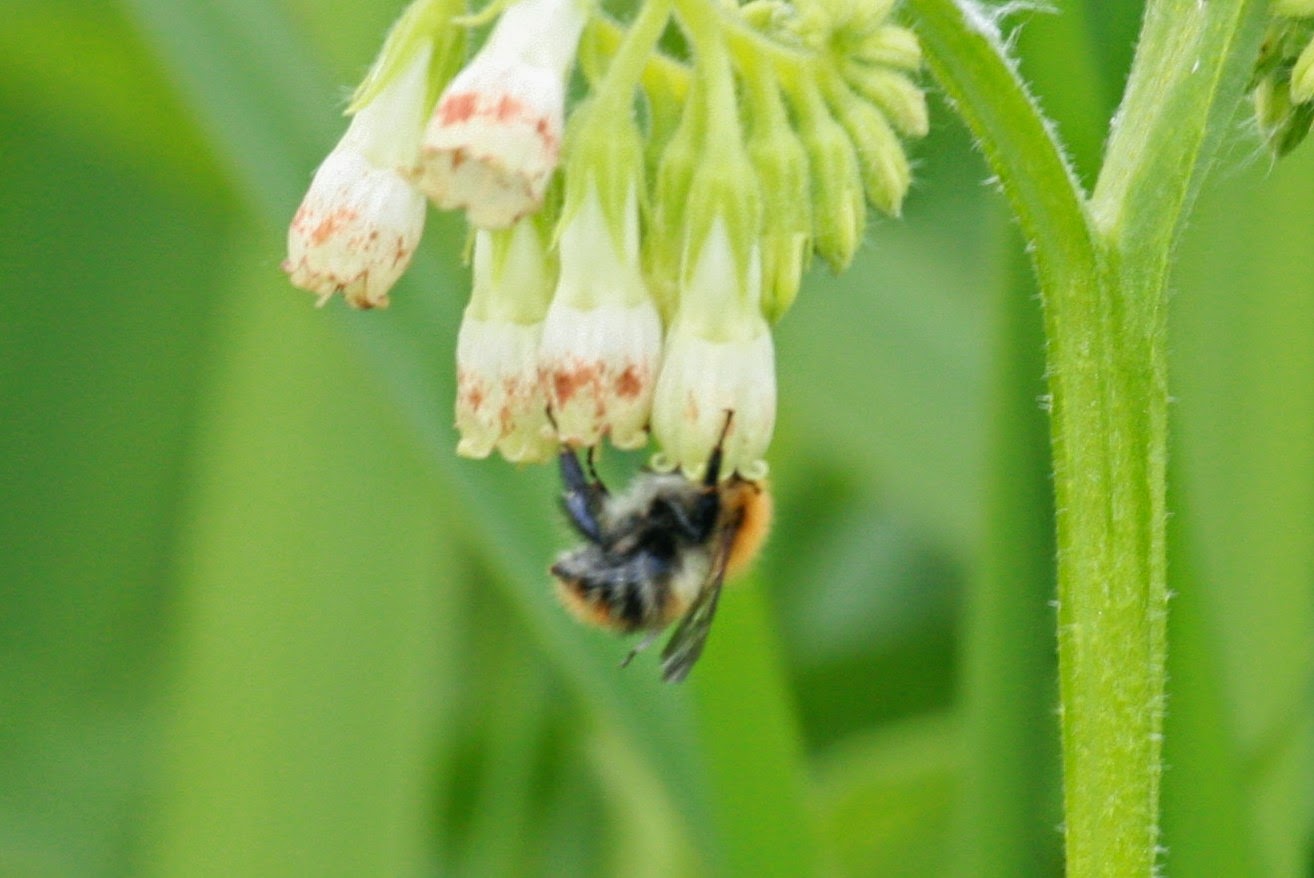 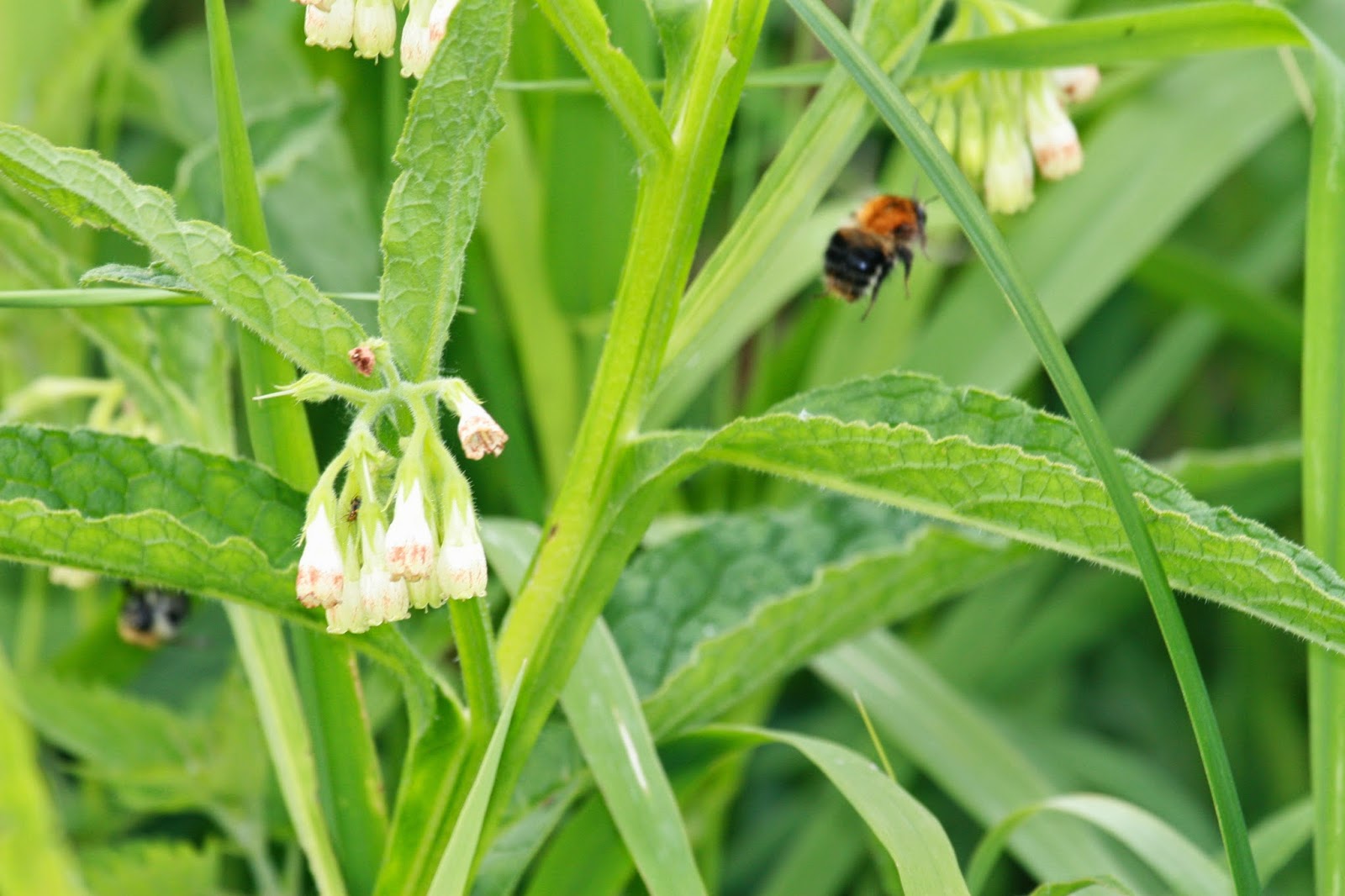 No such problems with the mass of Banded Demoiselle that sprang up wherever I walked in the damp stream-side pasture. I’ve never seen such a deep vivid blue. Two photos (M, then f) that would be great if they were better. 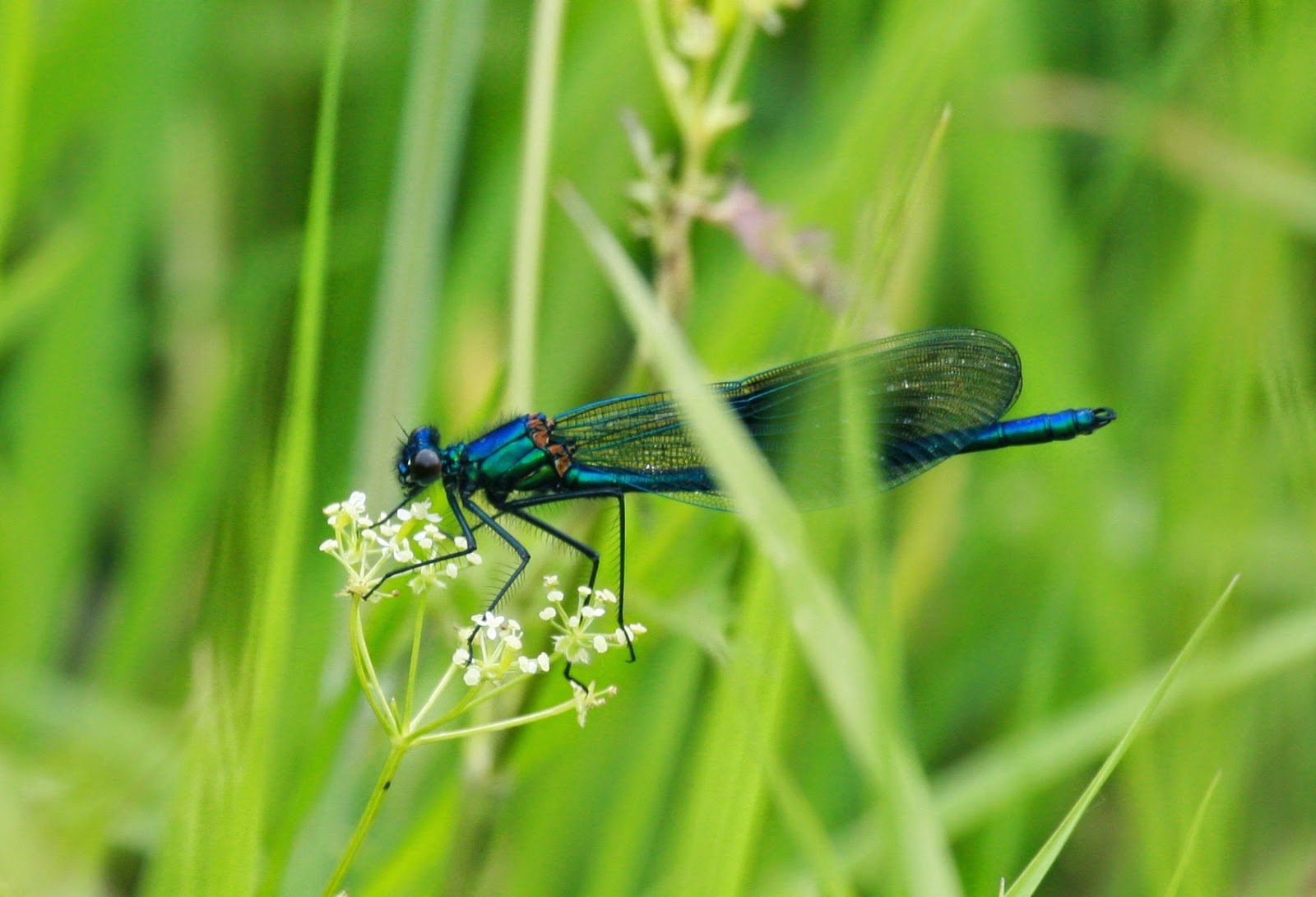 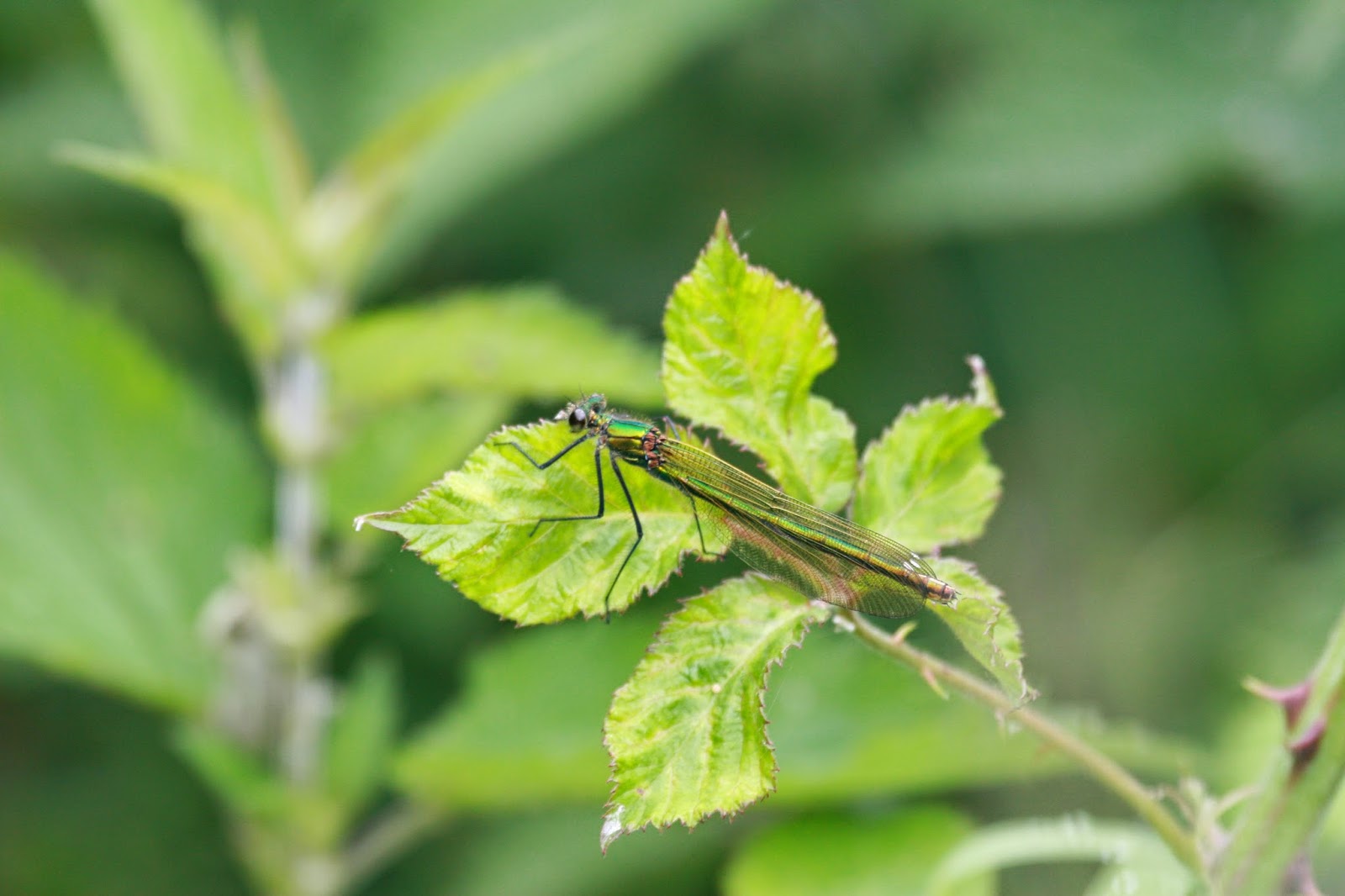 Further into the village, a Sedge Warbler and a Reed Warbler are battling it out for song every morning (and giving good close up photo opportunities too ...) and the local colonies of Swallows, House Martins and Swifts are back. I don't count the birds so have no idea what the population trends are.Slightly further afield two cracking summer plumage Black-Necked Grebes at Rye House RSPB yesterday.
No comments:

First stop somewhere in the Fens. I have no idea where I just plugged in a postcode and a road and off I went, trusting that a group of birdwatchers in the middle of perfectly flat plain would be easily located, and so it turned out. Equally fortunately 3 Dotterel were also easily located in a pea field (where else?) but unfortunately at distance and against the sun. Nevertheless a cracking 20+year reunion with this species and a chance to brush up on the finer points. Everyone else had their lenses and digiscoping equipment so I thought I'd try my hand at digiscoping. Slap the berry over the scope lense, click the shutter, how hard can it be?

Well fortunately for you the experts got here first.I'd thought the male seemd to have first winter-style feathers on the back so was pleased to see this described as "a wintery or first-wintery, male-ish bird".

Then done and on to Fen Drayton RSPB for a Black Tern. this was my first visit and wow, what a place. Its big. Like several Amwells joined together. I drove down miles of path, across the strangest tram-line I've ever seen, and then parked up. Just a few minutes in and I was comfortable picking out Arctic Tern when an realised that the annoying person next to me wasn't asking me what I was looking at but telling me that the reason all the birds were in the air was a White Stork gracefully gliding over the far side of the pit. Holy Cow! Not as good as having one on a lamppost just round the corner from you but neverthelss a cracking sight.

The rest of the list is Avocet, c30 Black Tailed Godwit, Hobby, then a few more standard birds such as Goldeneye, Oyk, Redshank, warblers galore, and I missed a few more.

Being largely by myself my comparative inexperience and caution gets in the way. Two brown waders went up with a Whimbrel-like call. If I had to guess I'd say 1 Whimbrel plus 1 Curlew given the size disparity, and checking on xeno-canto, but that's a pretty unsatisfactory conclusion. And then there was a tern settled amongst the Commons. Lighter, with a bill more black than red, could it be? But then it moved and the differences seemed to disappear.

A slow walk with camera round south Sawbo today. Willow Warbler, Lesser Whitethroat, Garden Warbler, plenty of Blackcap, a snatch of Whitethroat all adding to the local summer population. Otherwise poor reward for some slow going and patience. And poor photos too.x
Earlier there was an excellent hour or two in the company of Steve and Kevin at a local spot where we caught up with Raven, Red Kite, and a Shelduck belting across a farmer's field, and then a fleeting glimpse of the lates local celebrity - a male Lesser Spooted Woodpecker sticking its head out of a hole in a dead tree by the Stort.

DorsetDipper
Interested in all wildlife. Apart from small moths and hoverflies for obvious reasons.